The Woman Behind the Statue of Liberty: Who Is Lady Liberty? 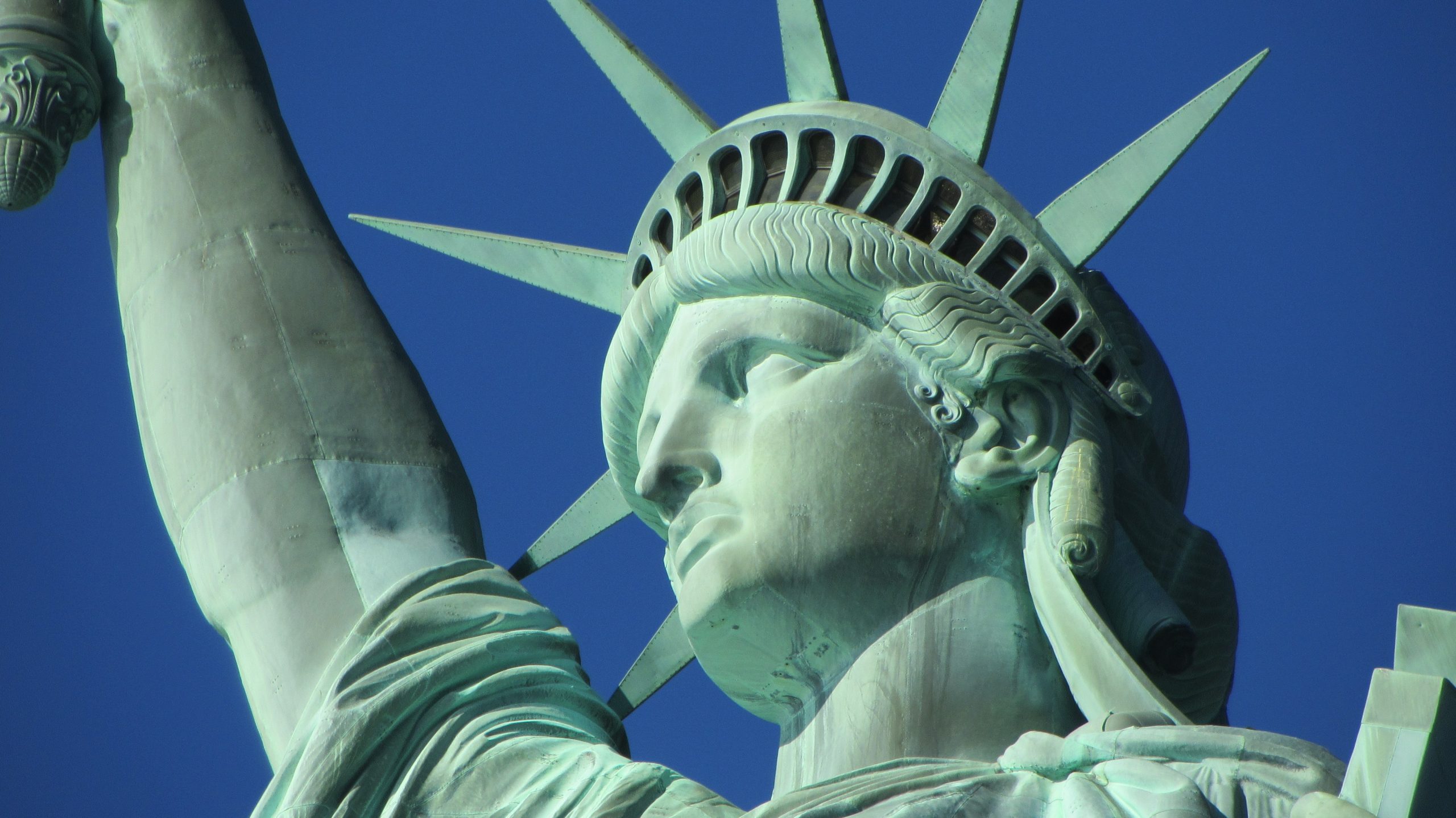 Who does the Statue of Liberty look like? Who was she modeled after?

You may think Lady Liberty is just a generic model of a woman holding a torch, but from the very beginning, her creator, sculptor Frédéric Auguste Bartholdi, had a vision for his statue. And like most pieces of art, there were actually several personal and creative influences that affected how the Statue of Liberty looked when finished.

In this post, we’ll explore the various inspirations behind the Statue of Liberty — who she looks like, why she looks the way she does and what it all represents.

A face that means business 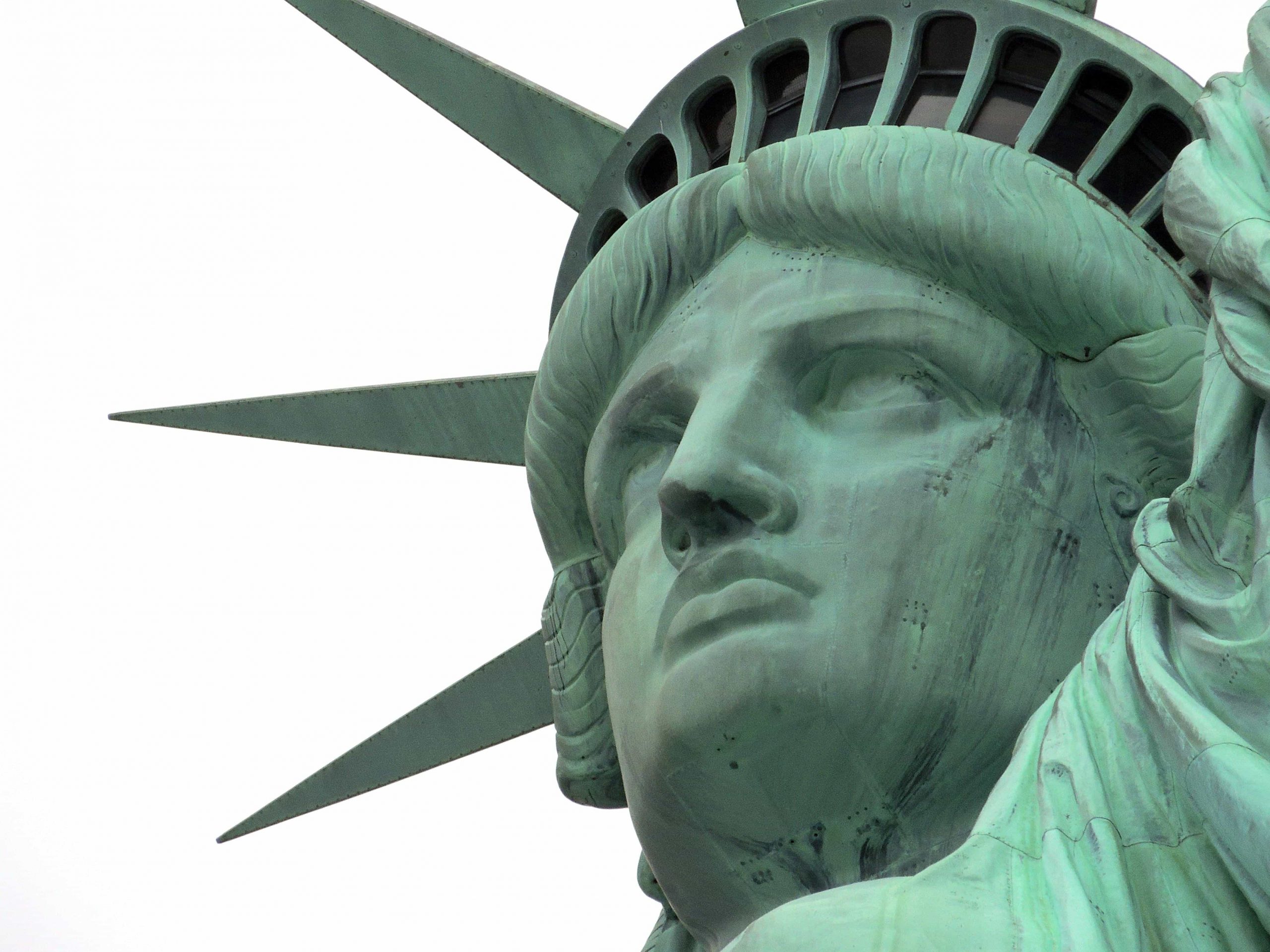 When the Statue of Liberty was first unveiled to the world in 1886, there was a lot of controversy as to who she resembled. Some people suggested celebrities or other works of art, while others went so far to say she actually looked like a man.

Yes, that’s right. There are a significant number of people who believe that, because of her strong jawline and serious expression, Lady Liberty might really be a he. At least in the face.

It’s true that, up close, her face can be quite daunting. Her expression is serious — determined. She isn’t smiling with a twinkle in her eye or posing seductively like many other feminine statues you might be familiar with.

Instead, her severe expression and the calm demeanor of her face represents the long and difficult journey to freedom.

But you can rest assured that, while her face might be intimidating, it’s not inspired or taken from a man in any way.

What the Statue of Liberty looks like as a woman

It’s hard to imagine how the Statue of Liberty would look in real life. But one Photoshop artist brought her to life with a little technical magic.

Take a look at the video below to see a realistic recreation of Lady Liberty.

What do you think? Keep this image in mind as we explore the women and ideas who influenced the creation of America’s most famous monument.

Statue of Liberty model No. 1? The artist’s mother

There’s a common saying amongst writers — “write what you know.” In this case, for Bartholdi, the idea was to build what he knew. After countless theories, there seems to really be only one person whom the Statue of Liberty most closely resembles.

While he never formally confirmed it, many people recognize that there is a significant similarity between the Statue of Liberty and the mother of Bartholdi, Augusta Charlotte.

When compared to the face of the statue, a portrait of Charlotte Bartholdi (seen above) looks almost identical. The stern eyes, long nose and tough jaw between the two of them makes it clear that she must have had some impact on the design, even if it was subconscious on the part of Frédéric.

Liberty in art and sculpture

There was a lot for Bartholdi to consider when figuring out the design for the statue. Fortunately for him, there were already a number of figures and monuments dedicated to liberty and freedom across the globe. Each one served as inspiration for Bartholdi’s final design.

In the late 1800s, one of the most significant female icons in American culture was the Roman goddess Libertas, a female figure clad in robes. In ancient Rome, she was worshipped as the goddess of freedom, particularly amongst slaves.

Even in the 19th century, this figure could be found on American coins, in popular culture, and on civic art. Representations of her were commonly used symbolically by artists, so it was the perfect inspiration for Bartholdi.

Broken chains and a tablet

He even considered adding broken chains in the statue’s left arm, but decided instead to place them by her feet in order to avoid controversy. In its place, Bartholdi chose to symbolize the concept of law with a tablet inscribed with the date of America’s Declaration of Independence.

The torch and crown

Her torch was added to represent progress, giving the statue a more peaceful appearance rather than invoking violence. Read our article about the Statue of Liberty torch to learn more.

Around her head, the crown’s seven rays form a halo representing the sun, the seven seas and the seven continents. It also evokes the official title of the statue, “Liberty Enlightening the World.” 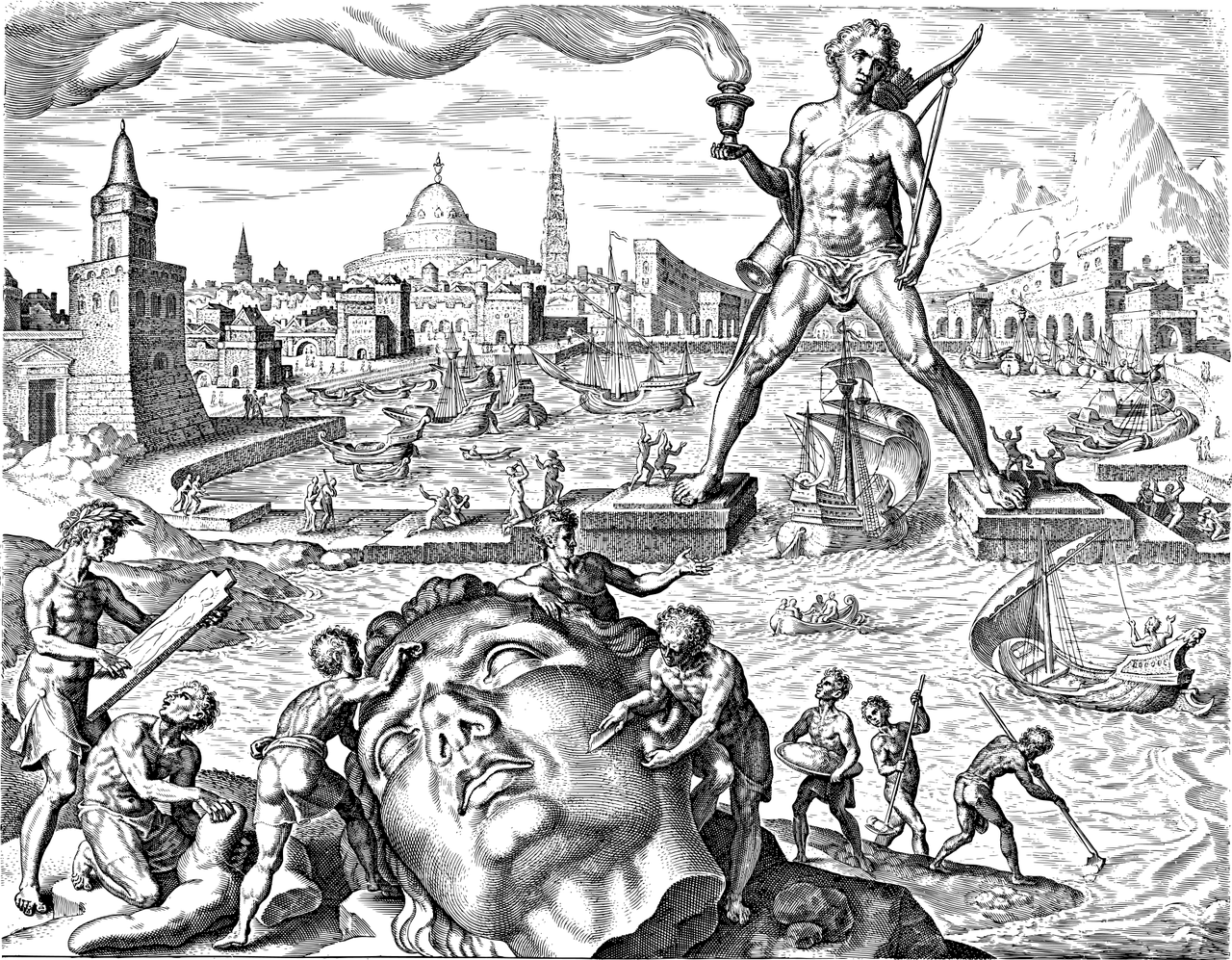 While the Statue of Liberty is undoubtedly Bartholdi’s most famous work, he was very well known for another project. A statue that was never actually built.

Years before he began the Statue of Liberty, Bartholdi was hired to design a statue planned for the entrance to the Suez Canal in Egypt.

His research led him to ancient giant Egyptian statues and, eventually, to the Colossus of Rhodes. This ancient bronze statue was over 100 feet tall and considered one of the seven wonders of the ancient world. The figure was placed at the harbor entrance to the Greek city of Rhodes, showing the god of the sun, Helios, carrying a light to guide ships. Sound familiar?

Ultimately, this led Bartholdi to design what became an early mockup for the Statue of Liberty. Inspired by Colossus, he created a robed Middle Eastern woman, a peasant, holding up a fiery torch. He called it “Egypt Carrying the Light to Asia.”

This idea was eventually let go due to high expenses. But for years it hovered in Bartholdi’s brain until eventually he was able to make it come to life in New York Harbor.

The Statue of Liberty: Many women — and people — in one 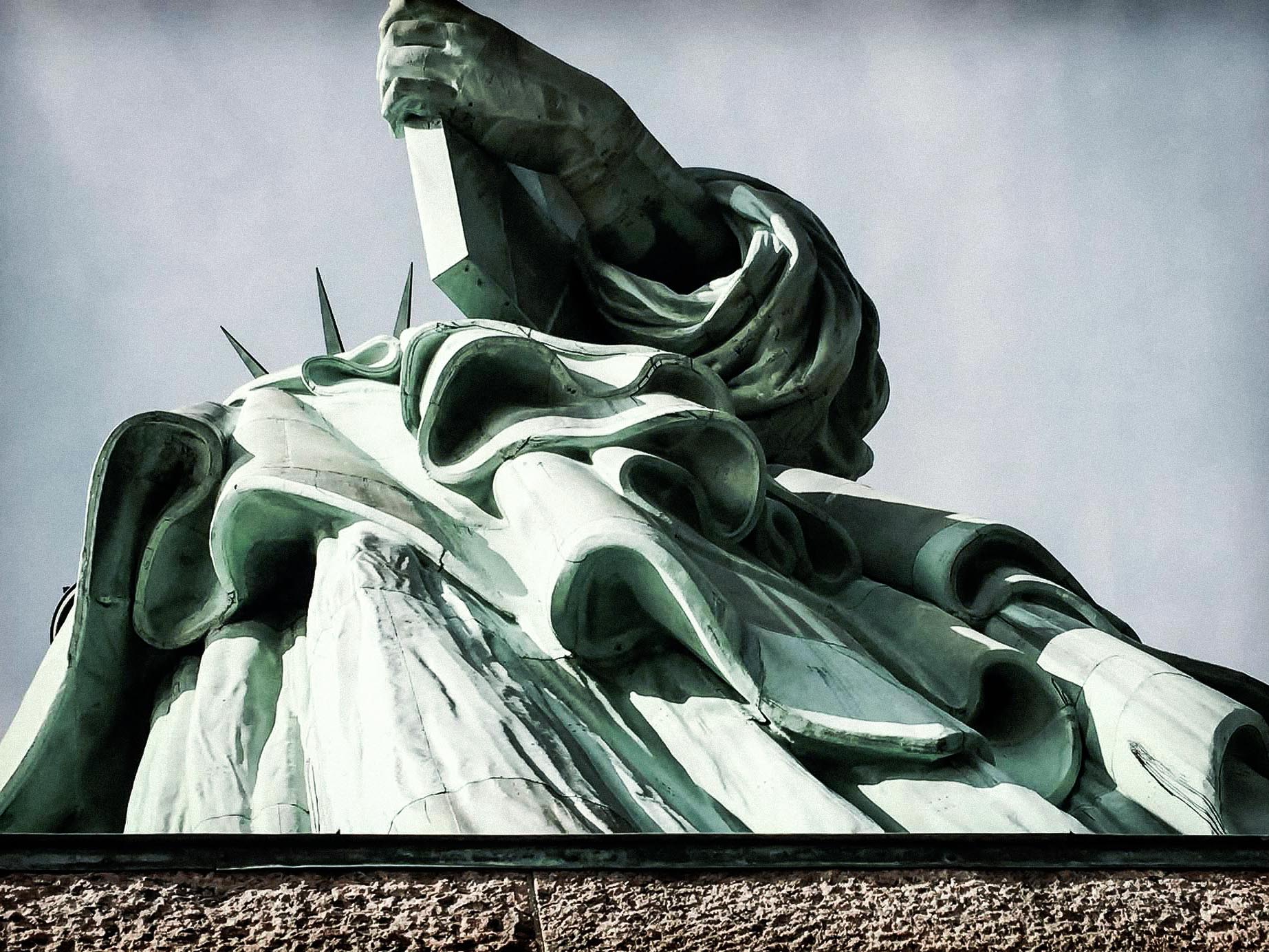 So who was the Statue of Liberty modeled after? Quite likely, a mixture of all of these: Augusta Charlotte Bartholdi, the Roman goddess Libertas, a peasant, and that extra inspiration in the artist’s own mind.

The result is a powerful symbol rising from the skyline of New York City that showcases the proudest ideologies of our country. In many ways, Lady Liberty represents all of us and the hope we have in building a better society through liberty, democracy, and independence.

Want to learn more about Lady Liberty? Check out our guide to the Statue of Liberty museum, where you’ll learn everything there is to know about the statue from its very beginning.