Where to Find Statue of Liberty Replicas in NYC and Beyond 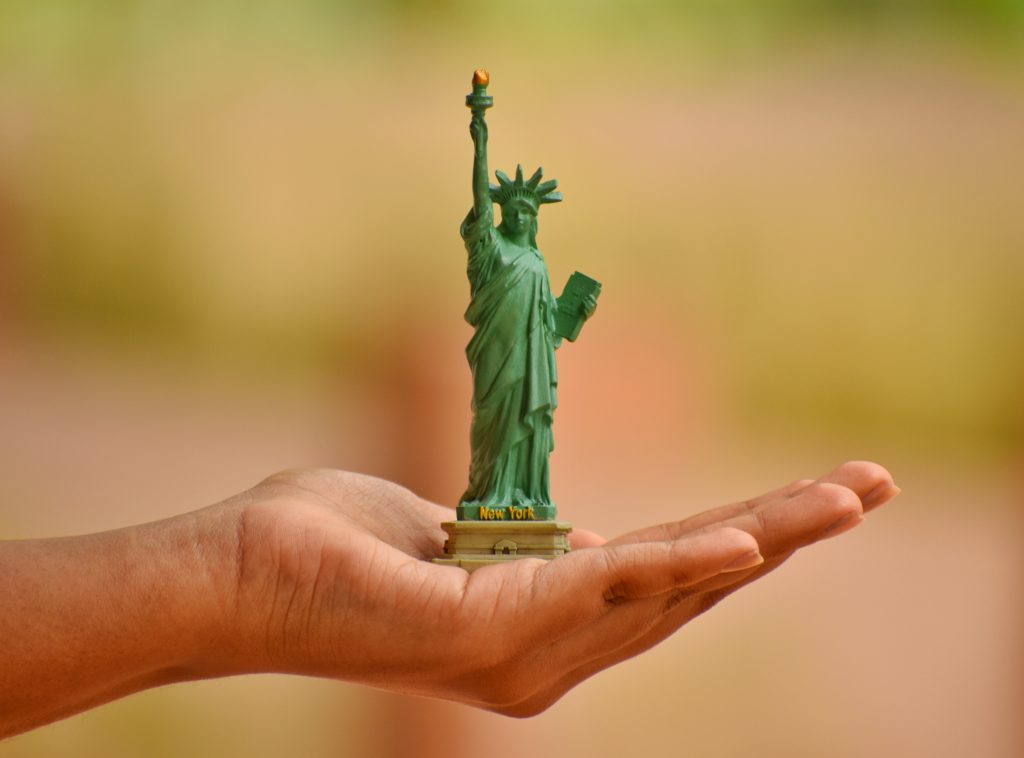 The Statue of Liberty is one of New York’s most iconic symbols. You constantly see her represented in art and pop culture year after year. So it should come as no surprise that there are dozens of miniature “Statues of Liberty” around the world.

From around New York City to farther afield in the United States to Europe and beyond, here are some of the places where you can find Statue of Liberty replicas.

Statue of Liberty replicas in NYC

As home to the original, there are many smaller versions of the Statue of Liberty throughout the five boroughs. You can spot them on street corners, in stores, at museums — the list goes on and on. 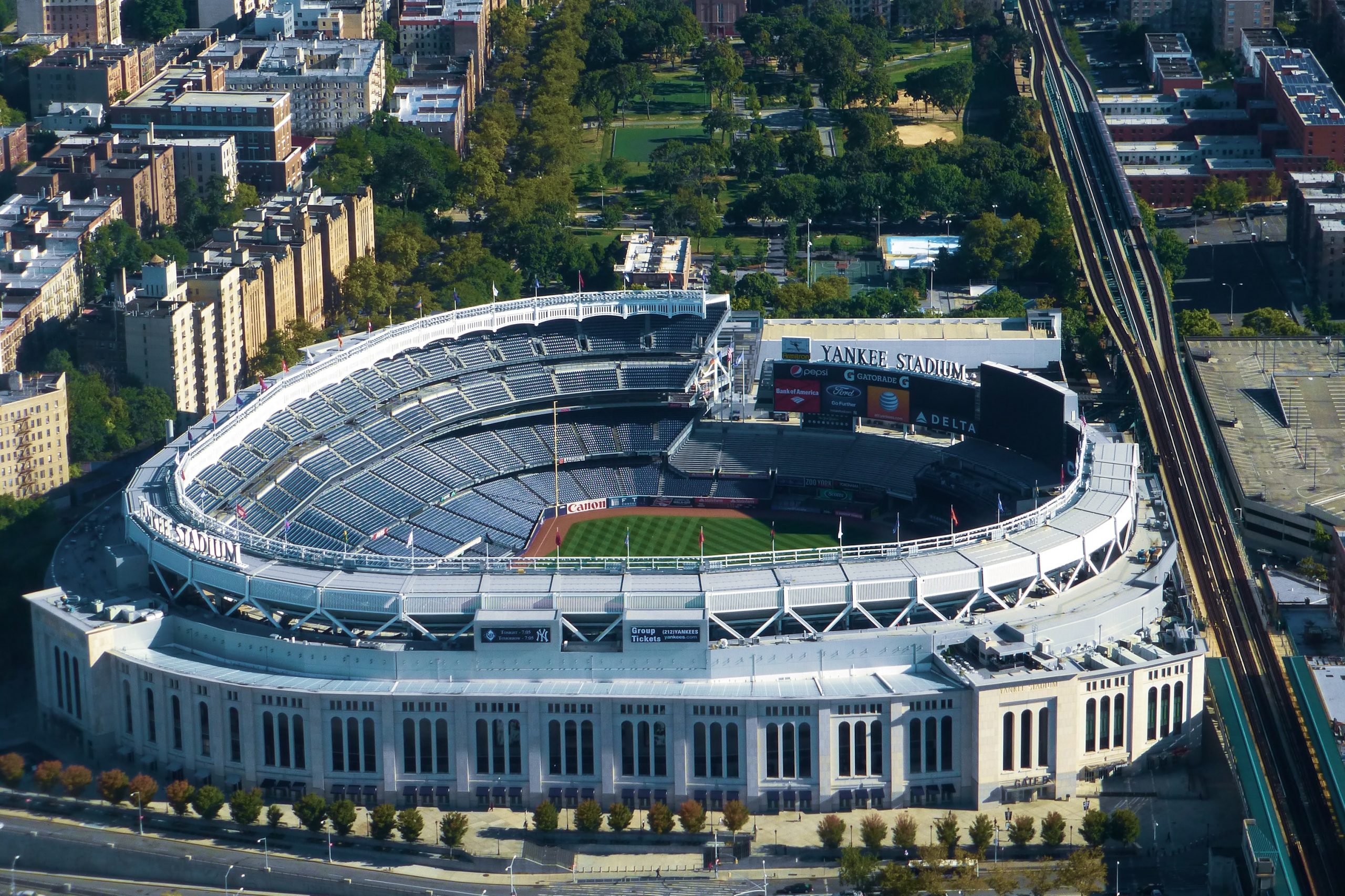 The only thing that’s more New York than the Statue of Liberty is the New York Yankees. And next to the stadium, across the street from the Bronx County Courthouse, you’ll find a small, grey replica atop a building.

Look for the giant sign that says “Eye Care & Surgery”, right next to the McDonald’s.

It’s a very random spot, with no discernible reason for why it’s there. But it’s a wonderful nod to another of the city’s most prized possessions.

In front of the office building at 667 Madison Avenue is a bronze replica of the statue. It’s one of only 12 cast from the original plaster mold that helped to create the real statue on Liberty Island. Leonard N. Stern, chairman of the Hartz Group which owns the building, purchased it in 2011 for over one million dollars.

Stern’s father was a German immigrant, who first saw the real Statue of Liberty during his crossover in the 1920s. This replica is much smaller in size, standing only 15 feet tall from bottom to top.

3. The Metropolitan Museum of Art 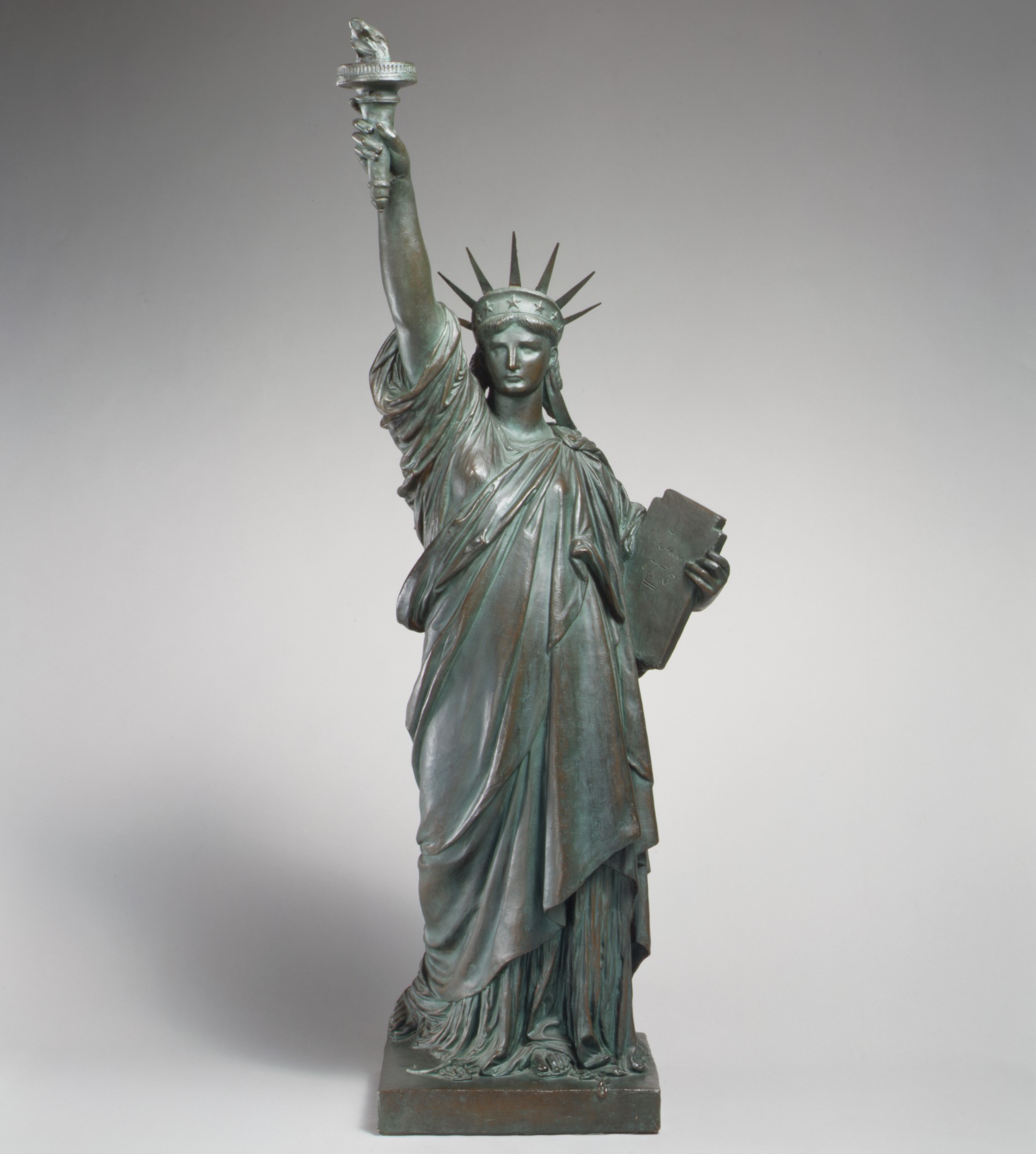 Inside one of the city’s most expansive museums, a small statue replica is shown on display as part of the European Art Exhibition.

Fun fact: This bronze sculpture is part of an edition of replicas that were sold to help raise money for the completion of the original Statue of Liberty in the late 1800s.

Replica of the Statue of Liberty at the Brooklyn Museum #thisisnewyorkcity pic.twitter.com/CGmDLXxNQN

This one has a fun history.

In the early 1900s, a Russian auctioneer named William H. Flattau placed a 30-foot Statue of Liberty replica on the roof of his Liberty Warehouse, located at 43 W. 64th Street. It often confused tourists in midtown Manhattan who thought they were seeing a shockingly close view of the statue.

The warehouse was expanded to include apartments in 2002, and the replica was moved to the Brooklyn Museum. It currently stands in the Sculpture Garden, which you can actually see from the parking lot.

Statue of Liberty replicas around the world

There are dozens of replicas outside of New York and the U.S. I’ve included some of the most famous and offbeat imitations you should add to your Statue-of-Liberty-replicas bucket list. (That’s a thing, right?)

Right in the heart of the city, along the Las Vegas Strip, the New York, New York Hotel & Casino features a skyline recreation of 1940s Manhattan. You’ll see the Empire State Building, the Chrysler Building and, of course, the Statue of Liberty.

There are a number of differences between the original and the Las Vegas replica. The most prominent is in the face. While Lady Liberty is often recognized for her stone-cold, almost masculine, expression, this replica chose to take a softer approach. Her eyes are not as tense, her lips are fuller, the jawline is not as pronounced. Overall, the face has more of a feminine and gentle look.

The color is also quite different. While the air and water from the Hudson gradually turned the statue green over time, the replica was built to be green. So the color is a bit lighter and smoother overall, a lot paler than the green we’re used to here in New York.

Did you know? Despite these differences, the replica is so well done it often gets mistaken for the original. This mistake once cost the U.S. Post office millions of dollars. 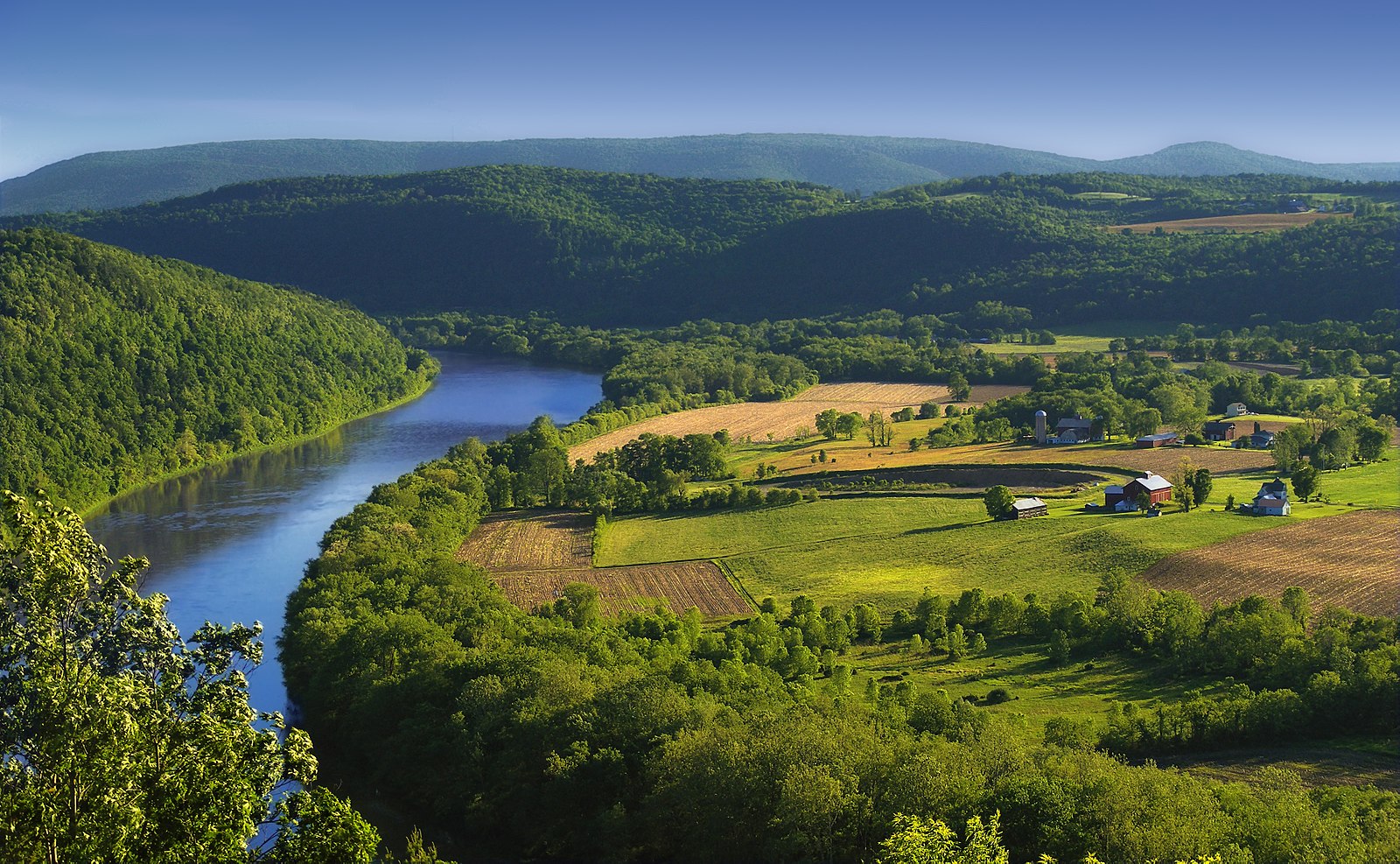 If you’re ever driving along Route 322 in the rural town of Dauphin, Pennsylvania, you might be surprised to see a small, white Statue of Liberty in the middle of the Susquehanna River.

The original (well, the original replica) was built by a gentleman named Gene Stilp in 1986 to honor the statue’s 100th anniversary. He used a collection of venetian blinds and plywood to build a 450 pound, 17 ½ foot tall replica.

Unfortunately, tragedy struck in 1992 when a bad storm badly damaged the statue, and it had to be removed from the pier.

But people loved the statue so much, they convinced Gene to build another. Over $25,000 was raised by the town for a stronger and sturdier version. That same statue still stands today and can be seen on both sides of the river. 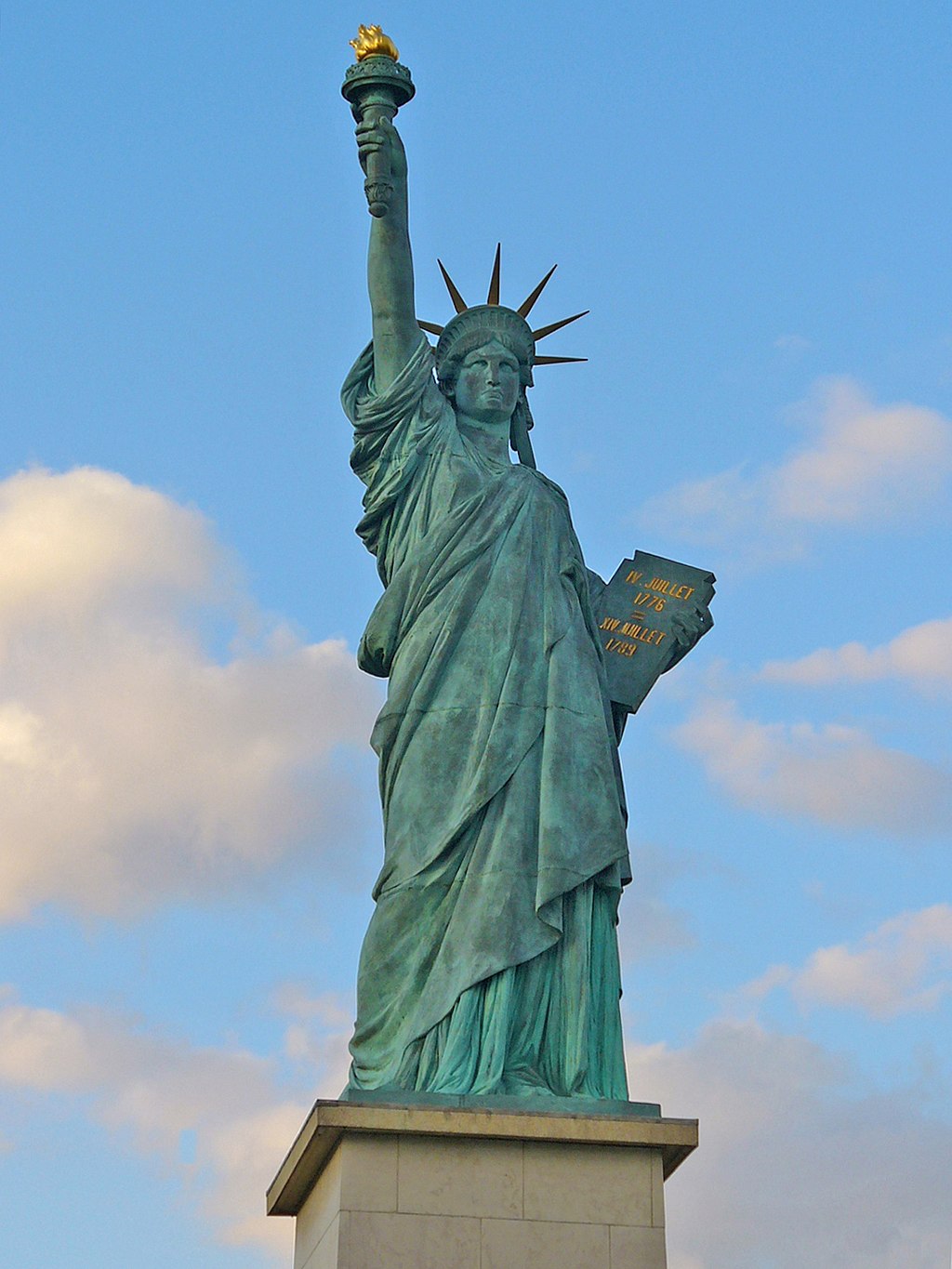 Seeing as the French were the ones who gifted us the Statue of Liberty, it makes sense that there are multiple replicas all around the country.

You can find them in cities and places such as:

These are only a few of the many cities in France that hold replicas. Many of which were built or donated by Frédéric Bartholdi, the architect of Lady Liberty.

There’s even a life-size copy of the torch, called “Flame of Liberty,” above the entrance to a tunnel in Paris. It was donated from the United States as a centennial celebration gift to mark the statue’s dedication. 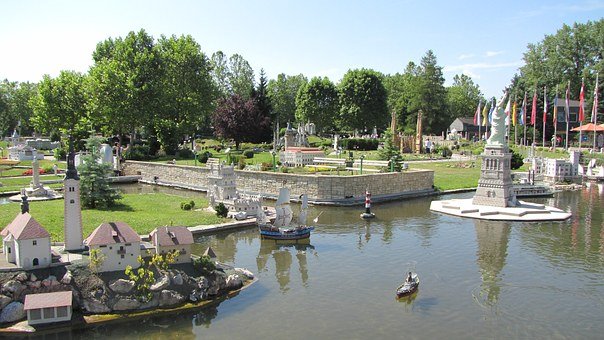 In Carinthia, Austria, there is a miniature park known as Minimundus, with over 150 miniature models of architecture from all over the world — including the Statue of Liberty.

Some of the other notable monuments on display include The Eiffel Tower, the Taj Mahal, the White House, and the Sydney Opera House.

In Cadaques, a small village once the home of Salvador Dali, there is a unique replica of the statue on top of a tourism information office. Instead of one, the statue has both hands raised in the air, both of them holding torches. 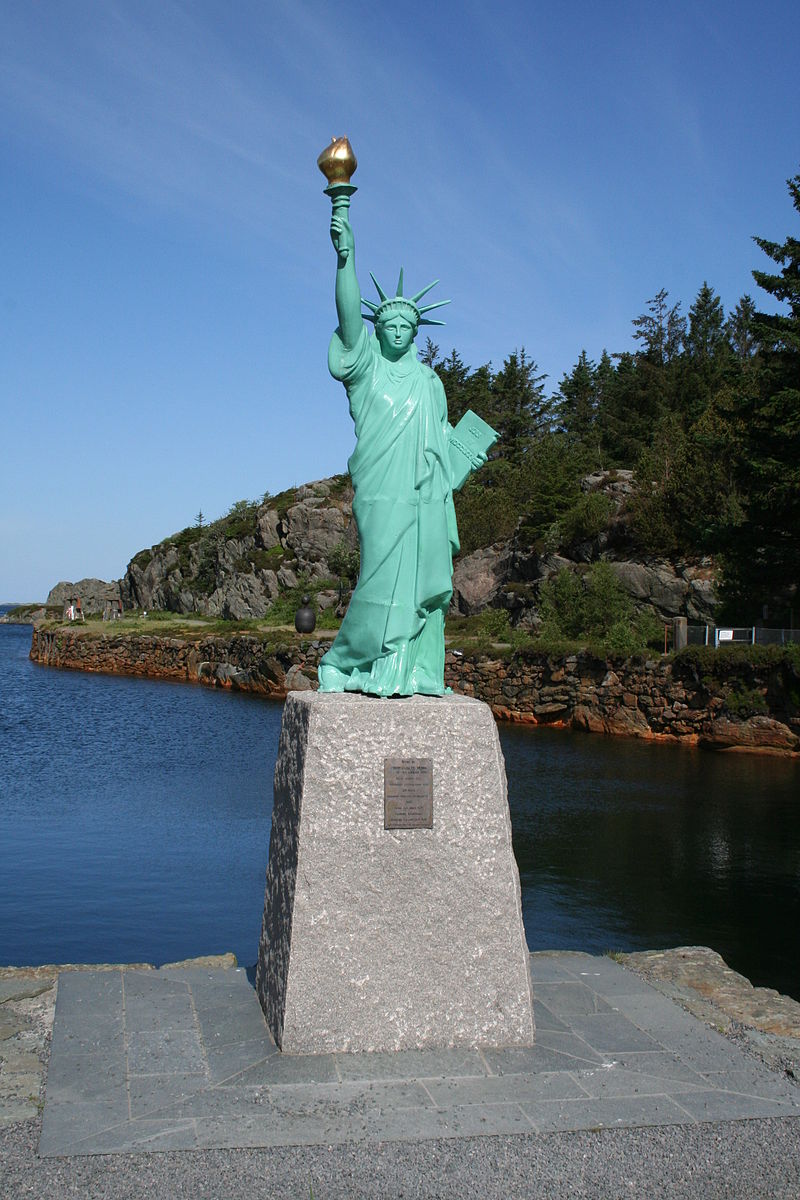 Rogaland County, Norway is home to a small village called Visnes. This small town sits on the western shore with a population of just over 500.

Visnes was once the largest copper mine in Norway and provided the copper that would be used to build NewYork City’s Lady Liberty. The small replica honors the village’s contribution to the original statue. 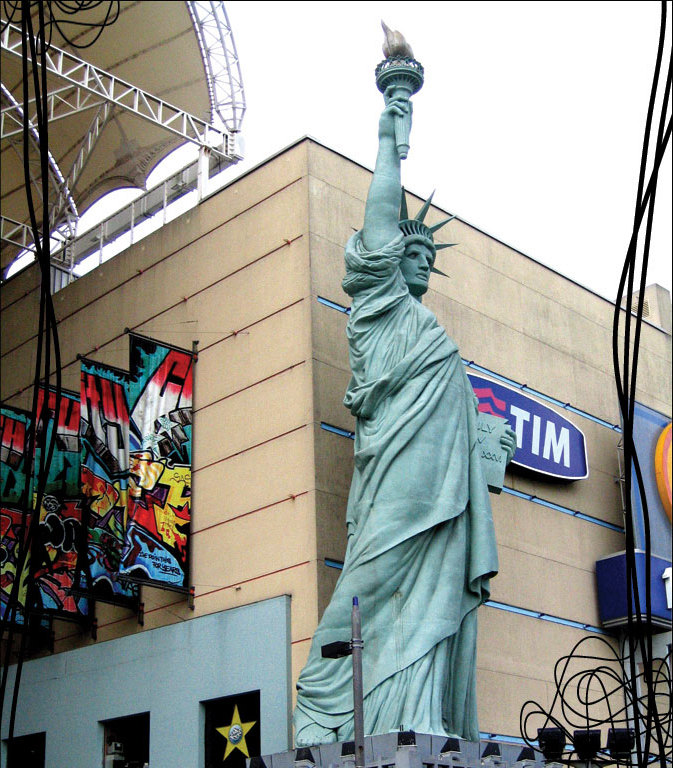 In 1899, Bartholdi built a nickel replica for the town of Bangu, Rio de Janeiro. It was commissioned in order to celebrate the 10th anniversary of the Republic of Brazil.

More replicas and reproductions of the Statue of Liberty

There are even more Lady Liberty knockoffs around the world. These are just some of our favorites. And if you don’t need it to look too much like a sculpture, you can see Lady Liberty recreated in different materials, too, such as built from LEGO blocks at Miniland USA in LEGOLAND.

In fact, pretty much any place that creates a mini America will typically include a recreation of the Statue of Liberty. She’s that famous — and we think she deserves to be, don’t you?