The Statue of Liberty is so symbolic to America that it is hard to imagine a time in history without her. The long and complicated journey she took from France to the shores of New York is an unforgettable story. But what happened along the way? How much money was involved? Who does she resemble?

All these questions, and more, will be answered by some of the most unique and curious facts about the Statue of Liberty. Read on and find out just how interesting her story really is. You’ll never see Lady Liberty the same way again.

1. Crowdfunding Money Paid for the Statue

When Frederic Auguste Bartholdi first came up with the idea for the Statue of Liberty, his biggest obstacle was money. Since the French government didn’t offer up anything to help pay for the statue, all of the funds had to come from the people of France. Citizens were encouraged to donate as much as they could, even if only a small amount. Bartholdi even contributed by creating rewards for donors — miniature statues of Lady Liberty engraved with the name of the contributor.

The workshop where the statue was being built was opened to the public for a small admission fee to help raise money as well. When the statue was first being assembled in France, Bartholdi even invited people to dine inside her as she got higher and higher. All of these fund-raising endeavors raised over $250,000 in total. It’s one of the earliest examples of crowdfunding ever!

2. The Statue’s Design Was Meant for the Suez Canal

In the late 1860s, before he was ever asked to design the Statue of Liberty, Bartholdi submitted a very similar idea for the entryway of Egypt’s Suez Canal.

Unfortunately, his design was rejected due to the high cost. As luck would have it, he was able to use the same concept years later when asked to create the Statue of Liberty. While specific changes were made for the American version, overall the two were very similar — a robed female figure bearing a torch.

3. The Face of the Statue Was Inspired by a Mother

The famous saying is “write what you know.” Bartholdi took it one step further and built what he knew.

While the torso and arms were modeled after his wife, the famously stern face of the Statue of Liberty was inspired by his own mother. Augusta Charlotte Bartholdi will forever have her face memorialized by one of the world’s most iconic landmarks.

4. Parts of the Statue Arrived in America Early

Don’t worry, this was completely intentional.

As yet another example of a crowdfunding tactic, the disembodied hand and torch of the Statue of Liberty sat in Madison Square Park in New York for six years. This was done to inspire the Americans to start their own donation pool.

Souvenir photographs were sold and people could even pay to climb a ladder and stand on the torch balcony. Definitely a unique form of advertising.

5. The Statue Was Meant to Act as a Lighthouse

It wasn’t enough just to be a symbol of freedom. Lady Liberty had to try and be a lighthouse too. When the project was first announced, the United States suggested that the statue could guide sailors into New York Harbor. After experimenting with a few different ideas, Bartholdi eventually ended up cutting windows in the flame of the torch and installing electric lights inside.

After a week in New York City, President Grover Cleveland put the Lighthouse Board in charge of statue lighting operations. While this might seem like a huge honor, it was actually quite a headache, as the statue was very expensive to light and was pretty useless as a lighthouse. It couldn’t even be seen from Manhattan after dark. The whole idea was eventually put to rest in 1902.

The original intention of the Statue of Liberty was for the centennial celebration of the Declaration of Independence. Even though it was just an idea at the time, the goal was to give the statue to the United States in 1876. After multiple delays due to slow fundraising, construction, design debates, etc., the official opening wasn’t until October 28, 1886.

7. The Pedestal Cost Almost as Much as the Statue

Yet another cause of delay was the time it took to build the statue’s pedestal. While France took on the tasks of building and paying for the statue, it was up to the United States to take care of the pedestal. This proved to be a lot more difficult than anyone could have guessed. So much so that when the statue arrived by boat in New York harbor, the pedestal wasn’t even halfway done.

So famous journalist Joseph Pulitzer stepped in and started a crowdfunding campaign of his own. He promised that anyone who donated money to the pedestal, no matter how much, would get their name printed in his newspaper.

The campaign was a huge success and generated over $100,000. Meanwhile, the statue pieces waited in crates on the island for almost an entire year.

Luckily, the delay in opening had no effect on the celebrations. A parade was held in Manhattan for all the residents of New York the day after opening.

To join in on the fun, employees of the New York Stock Exchange took the ribbons of paper from their ticker tape machines and threw them out the window. This random act of festivity eventually became a special tradition in the city, as every parade was accompanied by the streamer-like ticker tape falling from the sky. These financial data-tracking machines eventually became outdated, but the tradition still lives on. Nowadays we just use confetti or shredded paper.

Guide tip: Walk up and down Broadway in the Financial District to spot the “Canyon of Heroes”. The parade route is marked with a series of plates commemorating ticker tape parades in New York City’s history.

The Statue of Liberty is mostly made of copper, which doesn’t turn green unless heavily exposed to water and air. So when the statue first arrived in 1886, she was still a dull brown color, like a penny.

It took about 25-30 years for her to turn completely green. This green sheen, officially known as verdigris, actually protects the statue.

10. The Statue’s Copper is the Thickness of Two Pennies

Measuring exactly 3/32 of an inch, the copper layer is a lot thinner than most people expect. Left to stand on its own, the statue would definitely collapse.

But inside the body are a series of steel rods and a skeletal structure that support the weight of the statue and prevent her from collapsing. This support structure was designed by Gustav Eiffel, before he became famous for the Eiffel Tower.

Bonus fact: The amount of copper in the Statue of Liberty could make 30 million pennies.

11. There’s an Old War Fort Under the Statue’s Pedestal

Before opening day, before the pedestal, even before Bartholdi, there was already a huge structure sitting on Liberty Island.

Fort Wood is the star-shaped building underneath the pedestal. It was built long before anyone even thought of building a statue in New York. In preparation for the War of 1812 against the British, U.S. troops built a series of forts around New York Harbor to protect the city from invasion. Oddly enough, the British never attacked the harbor, so the fort was never used for battle.

Today, it almost seems like the fort and pedestal are one piece since the stone used for the pedestal was chosen specifically to match.

It might be surprising, but it’s true. Due to the statue’s height and conductive copper exterior, she is a clear target for lightning strikes.

It’s not known exactly how many occur per year, but she was recently struck four times in one night!

Yes, that’s right, the exact shoe size of the Statue of Liberty was calculated based on the size of her foot. With feet that measure 25 feet in length, her official shoe size is 879. She actually wears sandals.

Her waist is also on the larger size, coming in at 35 feet.

There are many replicas of the Statue of Liberty around the world. In Las Vegas, outside New York, New York Casino, there stands a replica of the New York skyline with a mini-statue. From afar this replica seems almost an exact copy, but up close you can tell that her face doesn’t have quite the same “motherly features” as the original.

This distinction proved to be problematic for the United States Post Office back in 2011. To celebrate the 125th Anniversary of the Statue of Liberty, her face was chosen as the subject of the “forever” stamp for that year.

A simple mix-up led to disaster when, after 3 million stamps had already been printed, a collector noticed that the face on the stamp did not match Lady Liberty’s in New York Harbor. Instead, the photograph showed the Las Vegas replica (which you see above). Despite admitting to their mistake, the post office wouldn’t discontinue the design until 2014. 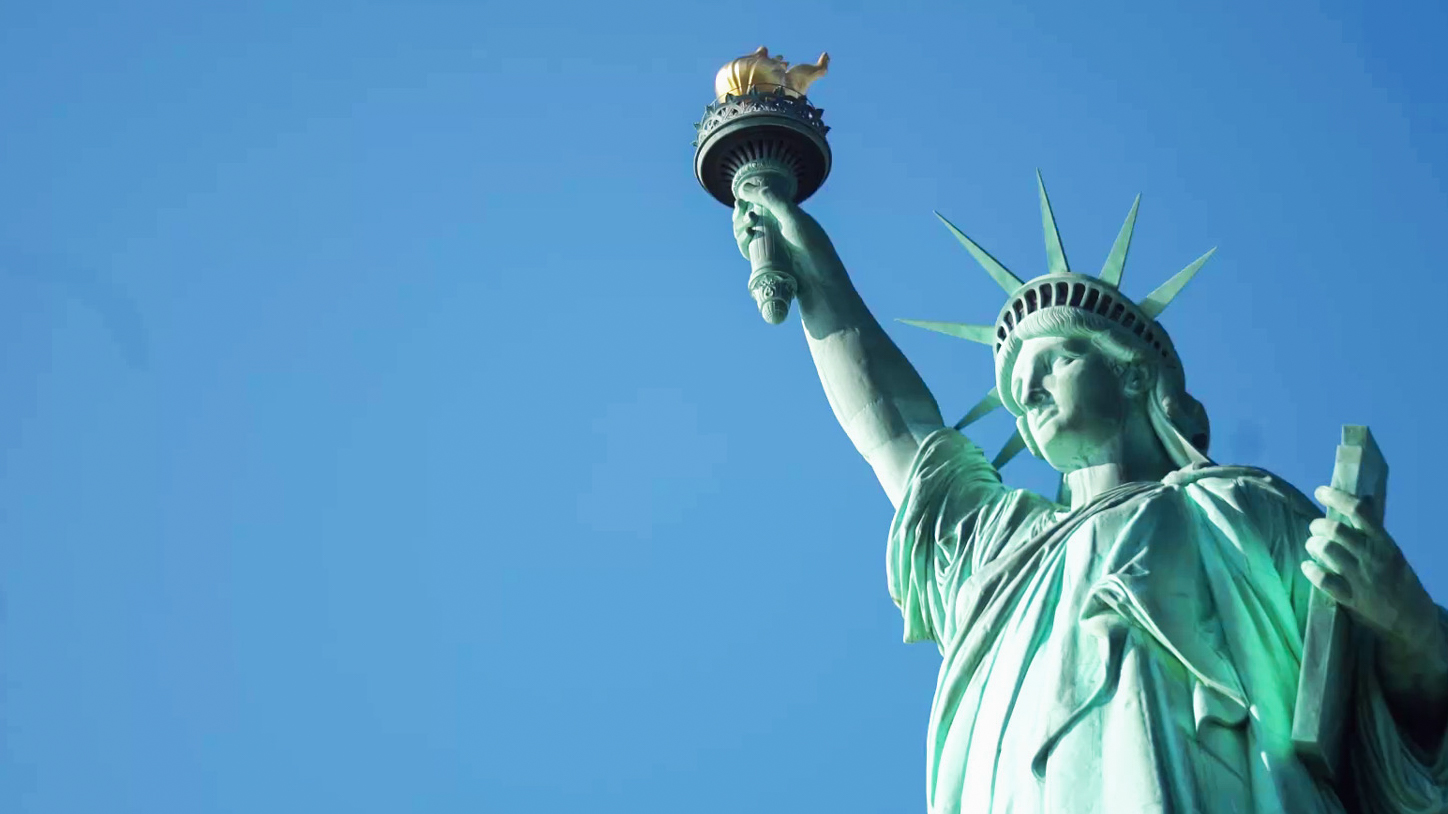 There you have it! The Statue of Liberty has some strange history, trivia, and secrets, but we think she’s beautiful.

And these are just a few of the unusual facts about the Statue of Liberty that we love. There’s plenty more where that came from. Take one of our tours or dig around this site, and you’ll find even more weird and wonderful stories about America’s most famous monument. 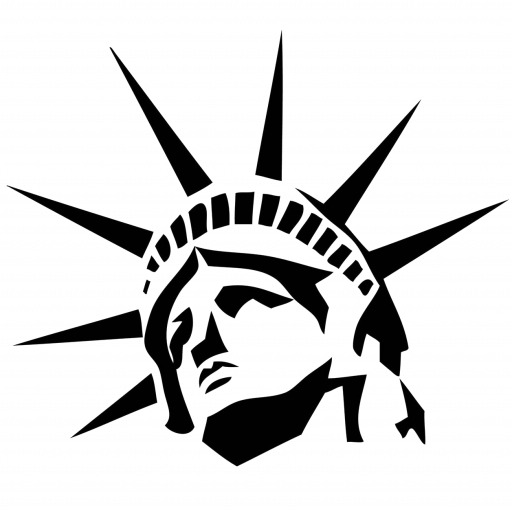