Statue of Liberty Meaning: What She Stands For 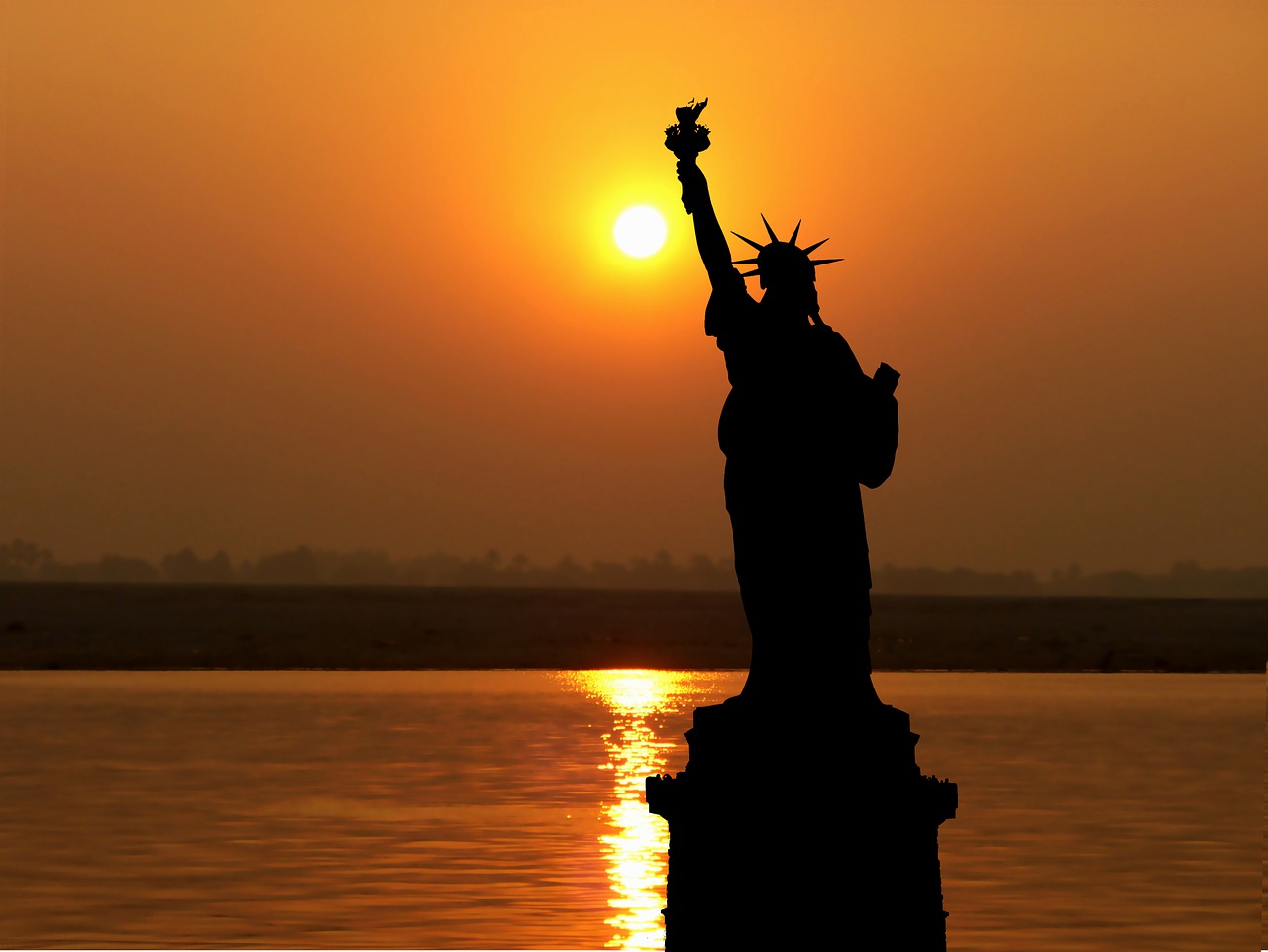 From the very beginning, the statue was built to celebrate and inspire. As a tour guide, I have the privilege of sharing her story with people every single day.

Frédéric Auguste Bartholdi (the architect of the statue) set out with a very specific vision in mind. Today, people often ask what exactly that vision represents. But there’s not just one, simple answer. The statue stands for many things, each represented by a different element of her design.

In this article, I’ll share everything about the Statue of Liberty’s meaning and symbols and break down piece by piece the significance of each element. 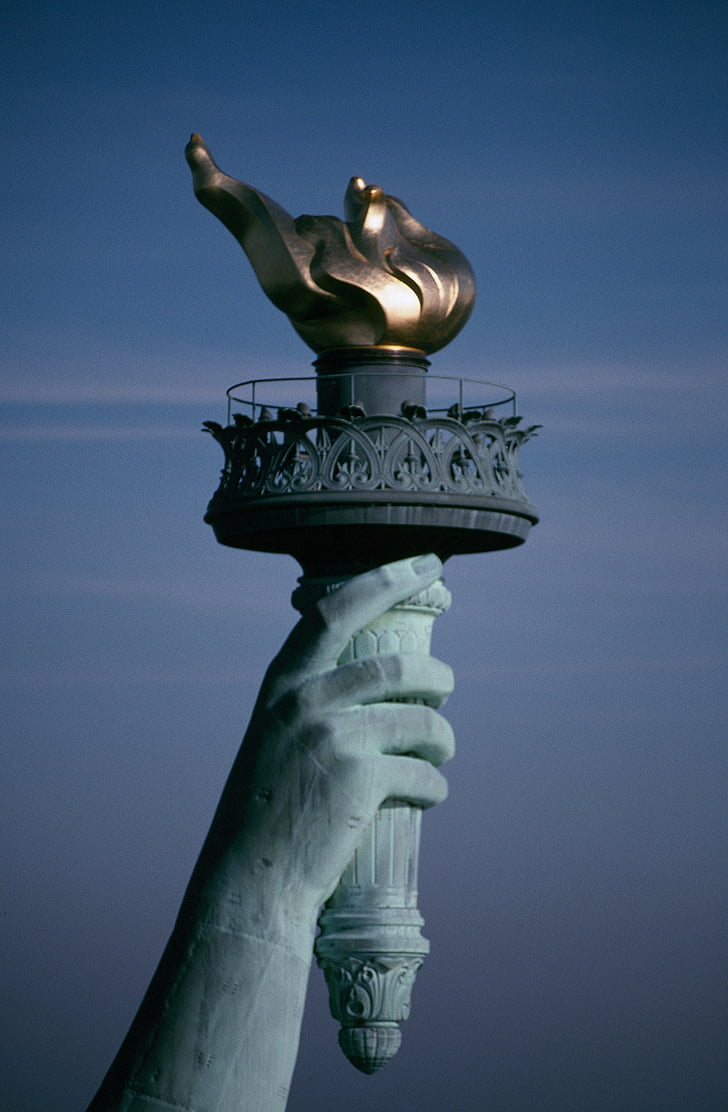 The statue’s torch is a combination of copper and gold leaf, held up high by Lady Liberty’s right hand. By day, the sun’s rays reflect off the gold, while flood lights illuminate the torch at night. The original torch sits in the lobby of the museum. What you see today is a 1986 replacement.

Symbolically, the torch represents enlightenment. It is meant to light the way to freedom and guide us toward the path of liberty and justice.

At one point, it was even proposed that the statue could act as a literal guide, lighting the way for sailors coming into New York harbor.

While this idea never came to fruition, the flame still remains. It represents the statue’s official title: “Liberty Enlightening the World.”

The use of the flame was chosen by Bartholdi for a very specific reason. A torch represents progress. Rather than promoting violence or chaos, he wanted to give Lady Liberty a peaceful appearance. 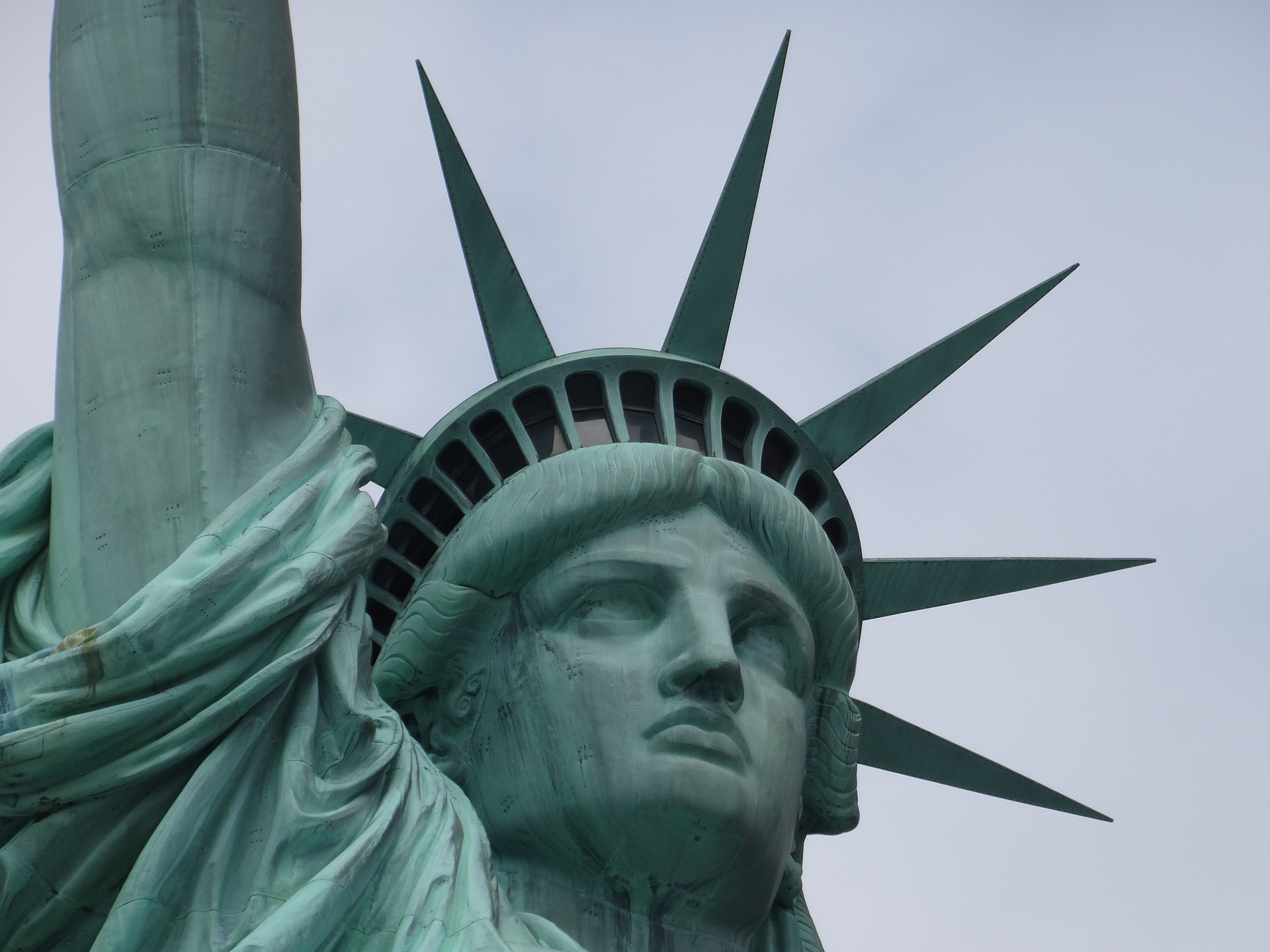 Atop the head of Lady Liberty is her crown. Not the crown you’d imagine on a king or queen, but rather a series of windows, and rays jutting out from the top.

The rays represent a halo (or aureole). They radiate forward like the sun — another way in which Lady Liberty enlightens the world.

It’s not a random number either. There’s seven rays on the crown, to represent both the seven continents and the seven seas of the world.

The 25 windows symbolize gemstones and heaven’s rays of light. This is best seen at night when the statue’s crown shines from within. 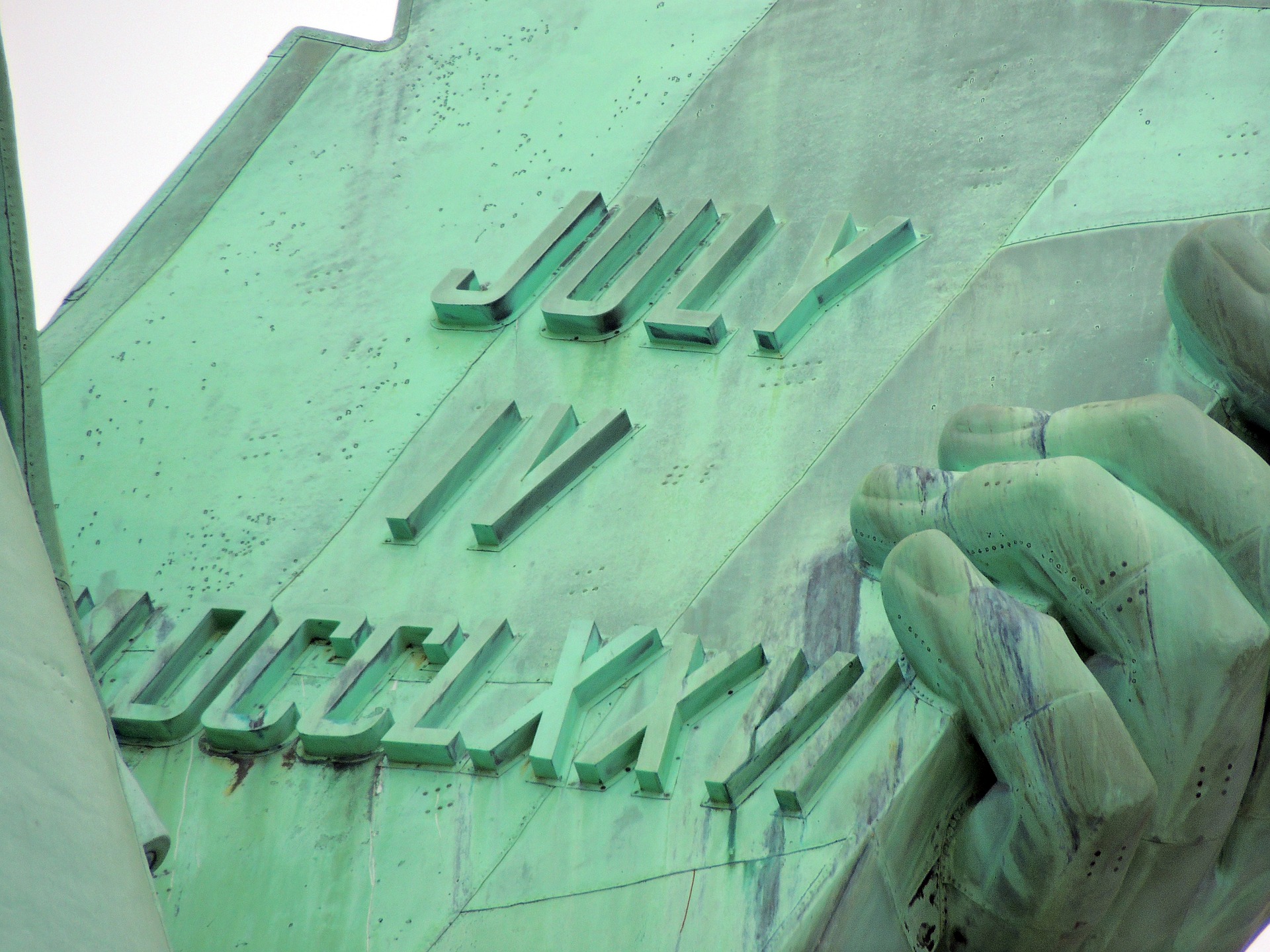 While her right hand holds the torch, the statue’s left hand sits by her side, holding a slab of copper over 23 feet long.

This slab is actually a tablet, with Roman numerals inscribed reading “July 4, 1776”. This date of American independence was chosen by Bartholdi due to its association with America’s Declaration of Independence. He greatly admired the American fight for liberty and freedom, as well as the U.S. Constitution.

As a symbol, the tablet represents a book of law. The shape isn’t actually square but rather a keystone. This signifies the great importance that the rule of law has in America.

Initially, Bartholdi wasn’t sure what should be held in her left hand. Early versions of the statue’s design show her holding broken chains. However, it was decided that this might cause too much commotion following the recent end of the Civil War. 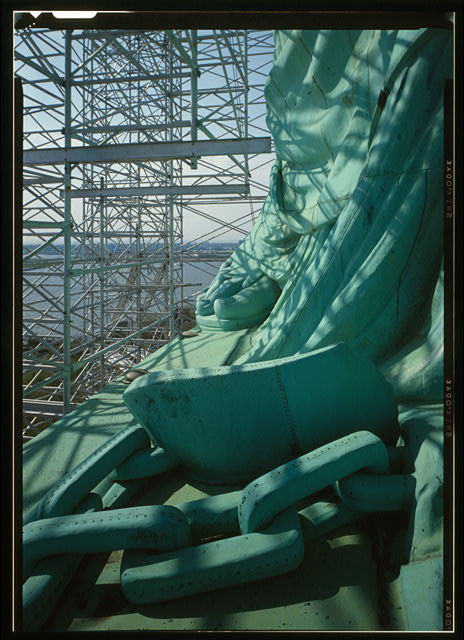 Not wanting to completely rid the statue of her symbolic broken chains, Bartholdi made the sneaky decision to move them to another location. One that wasn’t quite so obvious.

Today, Lady Liberty’s feet are surrounded by a broken shackle and chains. It shows her as a goddess free from oppression and servitude, very much reflecting the recent abolition of slavery in the country at the time of her opening.

The chains are half-hidden by her robes and nearly impossible to see from the ground. Since very few people see her from above on a daily basis, most visitors have no idea of their existence.

From above, you can also see that her right food is raised, depicting the idea that she is walking forward. This exemplifies the idea that progress is a journey, a never-ending movement forward. 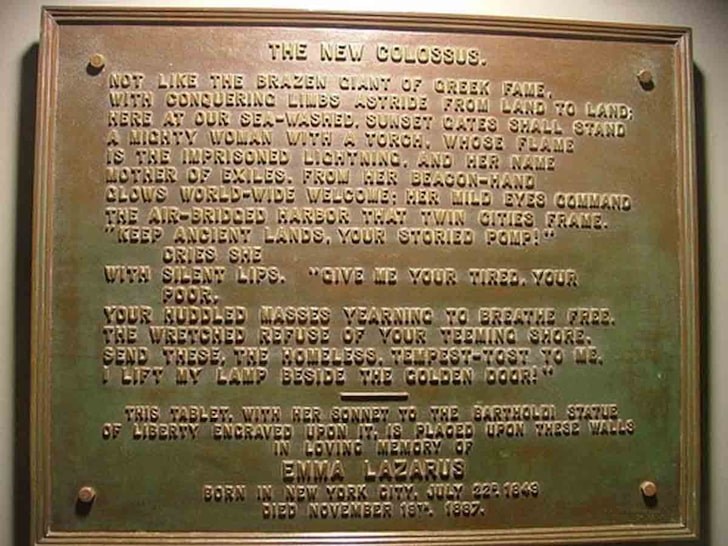 While the Statue of Liberty means many things to many people, nothing captures her impact and influence quite like the famous poem by Emma Lazarus.

As fundraising for the pedestal began in the United States, money-raising events were hosted throughout the city. Emma Lazarus was asked to contribute by donating an original work that would be put up for auction.

What resulted is “The New Colossus” — a sonnet that pays tribute to the statue’s symbolism as a beacon of hope. Lazarus famously refers to Lady Liberty as the “Mother of Exiles” and penned the iconic lines: “Give me your tired, your poor.” Here’s an excerpt:

“Keep, ancient lands, your storied pomp!” cries she
With silent lips. “Give me your tired, your poor,
Your huddled masses yearning to breathe free,
The wretched refuse of your teeming shore.
Send these, the homeless, tempest-tost to me,
I lift my lamp beside the golden door!”

Her inspiration for the poem came from her involvement in aiding Jewish refugees from eastern Europe. After seeing the conditions in which many of these people lived, she expressed her empathy and compassion through the lines of the poem.

In 1903, the text of the sonnet was inscribed on a bronze tablet and placed inside the pedestal. Today, that plaque sits inside the museum and forever commemorates the significance Emma Lazarus placed on Lady Liberty.

The Statue of Liberty: A timeless image 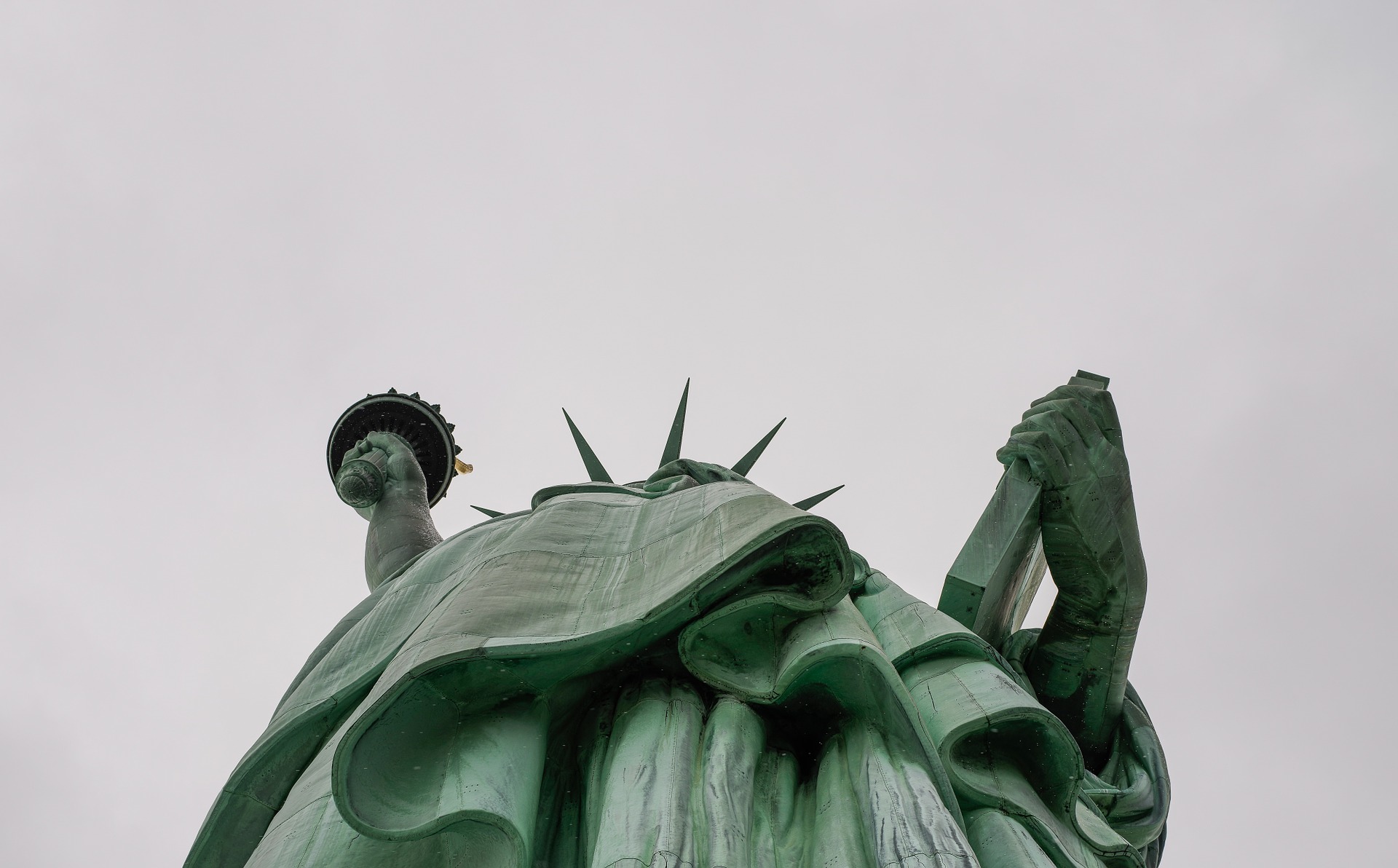 I believe the Statue of Liberty’s meaning — her ultimate meaning — still remains relevant today. But in some ways, what she represents has also continued to grow and change over time. Initially, she was meant to greet immigrants and travelers in New York harbor. This was back in the days when boats were the primary form of long-distance transportation. Nowadays, you’re lucky if you can get a glimpse of her from above as you fly into Newark airport.

But year after year, no matter how people have come to see her, that first moment is one you will never forget. Emotion swells over you and suddenly you realize why so many people have admired and adored her.

So in many ways, the meaning and the significance of the statue is impossible to describe. You only know that she will always extraordinary in every way.

Want to know more about the inspiration behind the statue? Read our post to discover the woman behind Lady Liberty.